The Astrology of the 2019 Australian Bushfires

Preface – this article isn’t about “blaming it on the stars” but a study on the intersection between the current universal energies at play in this moment in time and the match thrown into the literal tinderbox of the East Coast of Australia. As both an astrologer and Environmental Scientist, I want to offer my research to bring awareness and help find possible solutions.

I wish to offer my deep condolences to those who have lost loved ones or property in these fires, my heart goes out to you and I pray that your sacrifices lead to lessons learned and future hope for us all. I also honour and respect the emergency service and wildlife workers, mostly volunteers, who are out risking their lives to ensure the safety of others.

With smoke-filled skies for months now and horror stories all over the news channels, it’s no wonder people are looking for answers to what is next. I’ve been contacted by a number of people wanting to know if astrology has any insights about the current climate conditions in Australia and the horrific bushfire season we are in. When I was studying Environmental Science way back in the early 1990’s, events like this had been predicted but mostly ignored as climate change was considered a false science, despite reports like this and also this showing change is urgently needed.

So what is happening? I could include the science; how an intersection of complex weather systems such as El Nino, and the Southern Oscillation Index, the current positive Indian Ocean Diapole and late monsoon season in India are all contributing to this. But you’re here for my astrology insights so I will share those instead.

“I love a sunburnt country,

A land of sweeping plains,

Of droughts and flooding rains.

I love her far horizons,

Her beauty and her terror,

The wide brown land for me!”

Excerpt from Dorothea Mackeller’s “My Country”

As this poem was written not long after the great Federation Drought in 1901-2, and beautifully illustrates that Australia is no stranger to dryness; deserts, droughts and bushfires are all part of life here. I grew up in a bush suburb in Sydney and each summer we had a bushfire evacuation plan ready, and a few times it had to be enacted. So why does this year seem so terrible? And wide reaching?

First, let’s look to the nature of Australia and it’s links to Saturn. An anagram of the word Australia is Saturnalia and we can see Saturn’s dry nature and brown colour everywhere in these “wide brown lands” of ours. Saturn also features strongly in the three charts I look to for Australia.

European settlement in 1788 is Aquarius rising, which Saturn rules, and Saturn lies within the first house. 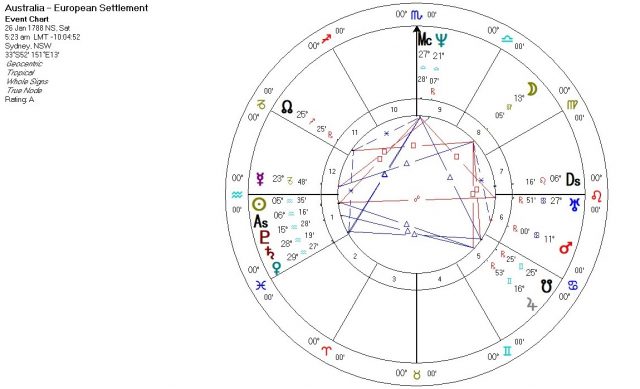 Oath taking of first Parliament members in 1901 has Sun conjunct Saturn in Saturn’s sign of Capricorn, and strongly placed in the angular 10th house. 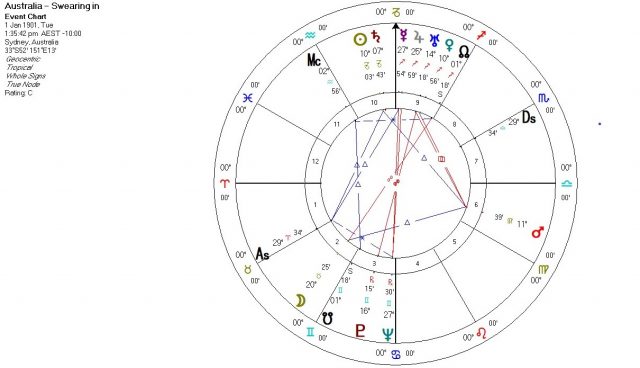 1967 Referendum on Indigenous rights is the latest chart, showing a country where we are all equal together. This chart has the Moon in Capricorn though there is no exact time for this chart so it’s difficult to know which house Saturn is placed in and any links to the Ascendant or Midheaven.

All of this means Australia is more prone to feeling the nature of transiting Saturn. Dry, cold Saturn is currently in its own sign of Capricorn, which is usually cold and dry too. However, according to Lee Leehman’s book “Classical Astrology for Modern Living”, Capricorn’s nature turns to dry and hot in the southern hemisphere seasons; and that is how much of Australia feels right now.

Saturn has been in Capricorn since December 2017, right when the current drought was declared, and I personally have noticed just how much drier conditions have become. In the semi-tropics where we live, summers are the wet season and winter is dry, but there’s been little rain here since the end of 2017. The beautiful rainforests around us are thinning, palms forests are turning brown, wetlands are drying out, and huge Morton Bay fig trees have died due to lack of water. In July this year, the Bureau of Meteorology announced it is the worst drought on record, right as a series of transits brought Saturn’s position in Capricorn to the fore.

Now, as Mercury retrogrades in watery Scorpio and pings off Saturn in Capricorn, we are looking back and realising how far down the wrong track we have come in our reliance on water. When our family moved to a property with tank water 4 years ago, we suddenly had a real connection with where water comes from and just how precious it is. Lots of small changes in lifestyle (eco cycles on washing machines, manual greywater system, buckets in showers to water plants, timers on showers when tanks are low, etc) have all lowered our water consumption significantly. Critical water restrictions are in place all over the East Coast and many western areas are expected to run out of water this month or next. Rain has been scarce and with a larger population to feed (including international exports), plus current farming methods heavily relying on irrigation, we as a nation are going through water faster than ever before. The Mad Max movies seemed like a mad fantasy, but their themes seem prophetic in today’s world.

Saturn’s connections to the nation’s charts

1788 – Saturn in Capricorn is transiting the 12th house, which is linked to weakness, physical restrictions and drained health. It also shows hidden enemies, which sadly could be linked to the number of arsonists taking advantage of these conditions to fulfil their own twisted agendas. Or cigarettes thoughtlessly tossed out of window’s, like the Binna Burra fire on the Gold Coast back in September. Saturn has also been trining the 1788 chart’s Virgo Moon, along with the South Node, drying out and consolidating the country’s vitality and strength.

1901 – A year ago this chart had it’s fourth Saturn Return, meaning we are supposed to be stepping in a new stage of maturity and responsibility. For much of this year Saturn and the South Node have been sitting on the Sun in Capricorn, bringing restriction, dryness, heaviness, consolidation to the core identity of the country – it’s people.  – all these themes are coming up right now, as are links to the

1967 – Pluto is inching closer to the Moon in Capricorn in this chart, as is Saturn, the two are to meet close to this point in January next year. Perhaps the crisis we are facing now is asking us to connect to our country, in a real and present way, to discover how we can live in harmony with it again.

The element of fire is hot and dry, and the current heat and dryness seem to call out for it to come. Bushfires started in August right as Saturn turned direct, and have been happening regularly since then. Then last Friday, the fiery energy started to build as Mars landed on the Midheaven of the 1788 chart, while forming a link to Jupiter in the free fire of Sagittarius. Later that night, the Moon moved into fiery Aries, acting like a match to dry kindling throughout the weekend. Jupiter expands whatever it touches, and Sagittarius is fire without boundaries, so the spread was contagious. It also marks a Jupiter return for the 1901 chart, so Jupiter’s energy was highlighted even more. Tuesdays are Mars’ day, adding even more heat where is wasn’t needed, and Mars is the profected timelord this year for both the 1788 and the 1901 charts, so we are particularly prone to his forceful heat this year as well.

It’s not all doom and gloom, as answers also lie in some of the charts discussed. Hope is on the horizon in the form of Jupiter in Capricorn, bringing his beneficial moisture to this same sign from next week (3 December). During the last 12 months of Jupiter in Sagittarius in the 1788’s chart 11th house, we’ve seen communities support and inspire each other to face the challenges together, and hopefully this cohesion will continue in Capricorn with better structures in place to support them. Mars will also have his fires cooled in the feminine waters of Scorpio from next week, and will stay that way until early January.

A positive way to use Saturn’s trine to the 1788 Virgo Moon is to neutrally analyse the research and data to find realistic, practical solutions. Saturn also likes to take responsibility, which could look like putting restrictions in place that may hurt now but will be of serious service in the long-term. We have changing patterns of rainfalls and so necessity dictates we must change the way we manage the land and interact with the land and the flora and fauna.

The Mercury-Uranus opposition in 1788 chart also shows just how innovative we Australians can be (see a small list here of the many things created in this amazing land) and with Pluto and the eclipses touching these areas in coming months, hopefully sudden, transforming ideas will be the way forward. In fact, with Uranus in Taurus currently squaring the Aquarian Sun and Ascendant in this chart, Australia is under great pressure to make choices right now about our future. Uranus in Taurus could indicate agricultural innovations, if only the leadership (public and corporate) will put the time, money and resources towards it instead of putting it off until another day/crisis/death due to the over-cautiousness which is Saturn’s shadow side.

In the 1901 chart, Saturn has moved away from the Sun now, and the South Node is slowly backing away too. The coming eclipses will highlight this degree, and so we won’t reach truly solid ground until mid January 2020. Perhaps it’s exactly the shake up we need to get off this wrong track and onto the right one?!

What can you do?

1 thought on “The Astrology of the 2019 Australian Bushfires”